2008 marked the inaugural Corbriwoodstock celebration of music, art, summer, and friendship. While the intent was to keep the event low-key and small in its second year, the word leaked in 2009 and 2010. The leak became a flood(literally, and true to Woodstock form, in 2011). And before anybody knew it, it was larger than anybody could have imagined. People came from miles in search of truth and great music. They came across state lines. Designated camping areas for a couple of hundred invited guests now had to accommodate thousands.

Water buffaloes were set up by Gibsonia and West Deer municipalities to keep guests hydrated. Others skinny-dipped in the pond.

Emergency food supplies were air lifted in.Parking facilities were saturated and visitors were forcedto abandon their vehicles wherever they could find enough room.

Rt. 910 was closed for the weekend. People came to find themselves. They came to lose the smog of the city.

They found that they were billion year-old carbon, and they had found the garden. When it was all over, most vowed to return. They were the beautiful, cool people. Others vowed to never return. Screw them if they can’t handle it!

The rest of us will be kicking back with a favorite beverage in our hand, listening to great music. Enjoying a summer Sunday afternoon with friends. Come early and avoid the traffic gridlock! Peace!

Well, I came upon a child of God
He was walking along the road
And I asked him, where are you going?
This he told meSaid, I’m going down to Vento’s Farm,
Gonna join in a rock and roll band.

We are stardust, we are golden,
We are billion year old carbon,
And we got to get ourselves back to the garden.

We are stardust, we are golden,
We are billion year old carbon.
And we got to get ourselves back to the garden.

We are stardust, we are golden,
We are billion year old carbon.
And we got to get ourselves back to the garden.

By the time we got to Woodstock,
We were half a million strong
And everywhere was a song and a celebration.
And I dreamed I saw the bomber death planes
Riding shotgun in the sky,
Turning into butterflies
Above our nation.

We are stardust, we are golden,
We caught in the devils bargain,
And we got to get ourselves back to the garden.

The Woodstock Music and Arts Fair occurred between August 15 and 18, 1969, the “Summer of Love”. Nearly 500,000 people decided to venture to New York state and participate in a weekend-long music and arts festival. Remember…this was long before cell phones, the internet, texting, CD’s, DVD’s, VCR’s, video games, and generally before digital ANYTHING!  Somehow, people found their way there, and were treated to well-documented incredible musical performances. We will be paying tribute to this historic musical phenomenon throughout the day. Feel free to find your place, man and let your Freak Flag fly!

Check this web page regularly , and we will keep you posted on  the weather , the performance line up , and just about everything related to ‘Corbriwoodstock”. 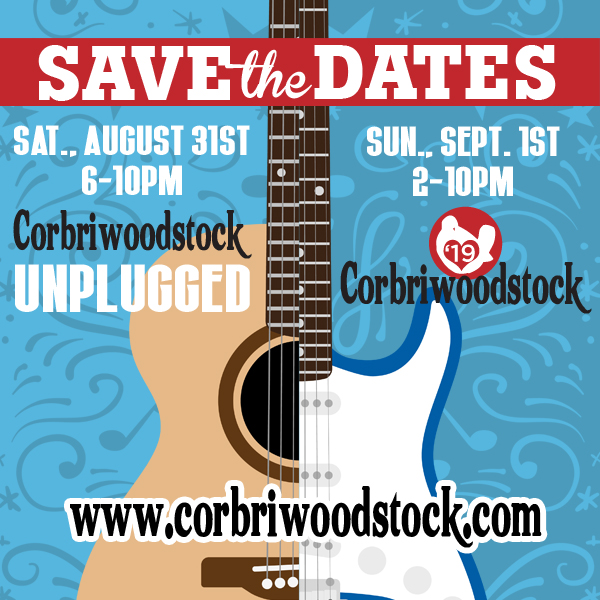 Corbriwoodstock is an annual music festival held in the woods of beautiful West Deer Pennsylvania. CWS began in 2008 as a small gathering of musical friends on a chilly October afternoon and has now grown into a wonderful all-day festival based on great music and great friendship.

Though food and beverages will be available for purchase at Corbriwoodstock, guests may bring food, & beverages of choice plus their own lawn chairs, blankets, tents, etc. This is a “family friendly” event where everyone is treated with love & respect.